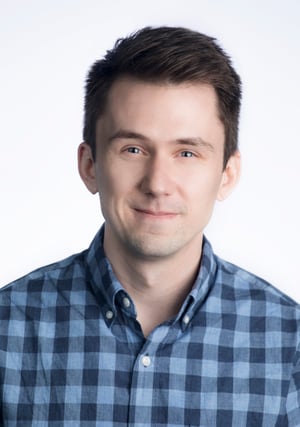 Before attending Nashville Software School’s (NSS) Data Science Bootcamp, Justin Rothbart was a workforce analyst for an insurance company. He was working with Excel and SQL but was looking to grow as an analyst and learn more tools. As he explored ways to automate parts of his job, he kept running into Python and R which sparked his interest in programming. He started to look at Master’s programs, but found NSS’s data science program and decided to apply.

It’s awesome to work on real-life problems vs. theoretical problems. It prepares you for your career.

Justin’s job search was the kind we all dream about. He began to apply for jobs early in the program as a form of “stress-relief,” but didn’t plan to execute a full search until the bootcamp was over. He placed most of his focus on his coursework and was in a group project when one of his teammates mentioned they were looking to hire an analyst at Ingram Content Group. He met with three of his fellow classmates that Ingram had sent to the bootcamp to learn more about the job and company culture. It was a fit on all sides and after formally interviewing, Justin was hired well before the bootcamp concluded.

While finishing the bootcamp, he was able to build his domain knowledge at Ingram.

Since Justin works on business projects during the day, he wanted to do something fun for his final capstone project. Inspired by classmate Taylor Perkin’s mid-course capstone, What Makes a Song Popular, Justin wanted to see if he could predict a musician’s future sound given their current body of work.

He explained his data process as follows: “I spent a lot of time reading documentation for a Python package called spotipy, which allowed me to interact with the Spotify API. I really focused on creating repeatable code to pull an artist's albums and tracks, and then pull granular track-level data that I could feed through my models and ultimately create visualizations. I also spent a lot of time iterating through ideas on how to present my information to a diverse audience, which ultimately led me to create individual web pages for each of the 3 bands that I focused on.”

He used the Python package pandas to wrangle the data, scikit-learn to build models, and Matplotlib/Bokeh to create visualizations. He used Bootstrap to style his website and used JavaScript through Bokeh to allow for interaction with the visualizations.

Justin shared, “I learned a lot by struggling through my capstone project, but one of my largest areas of growth was learning how to manage and own my project. I had to learn how to set realistic expectations for a minimally viable project, create a list of stretch goals, and create daily task lists that would help drive my project towards completion. I used a whiteboard notebook to store my vision for my final project, document major steps for my .readme file, and to inevitably erase my sketches as my project pivoted unexpectedly during the iterative process.”

You can see his project on his portfolio website and see his code on Github.

We also spoke with Justin back in March about his mid-course capstone in our Discovery Through Data series. Learn more about When Was The Golden Age of Video Games? on our blog.

Finally, hear Justin talk about his bootcamp experience on our podcast.