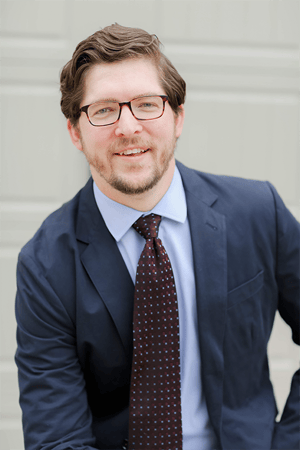 Dustin Murdock first became excited about development when he was pulled in as the subject matter expert on a project to build a new software system for the medical laboratory where he worked. “I became so heavily involved with that process that I helped contribute to the database, the reporting system, became the primary trainer for the system, and wrote the lab copies of documentation for use of the system,” he shared. “I saw the force multiplier effect of great software and how much it improved the important work being done in the lab. The ability to create something in an interesting manner while solving real-world problems was incredibly compelling.”

The combination of creative problem solving and limitless possibilities for learning make software development a field where I can thrive and grow in a way that was not possible for me to do in my previous career.”

Before deciding to attend Nashville Software School (NSS), Dustin did his research and spoke with graduates about their experiences. Dustin even considered self-study, “I knew I could learn development on my own but would probably run into dead-ends and pitfalls because of the wide array of things to learn.” In his research Dustin heard that NSS was “tough but fair” and believed that the success of NSS’s graduates represented the quality of the bootcamp.

As a part of Web Development Cohort 38, Dustin enjoyed the collaboration of the group projects. “I thoroughly enjoyed the osmosis of learning and creativity that happened when working as part of a team and being proud of the product at the end of each sprint,” he said. As he started working on his front-end capstone project, Dustin started to feel imposter syndrome creep in. But he quickly realized that he wasn’t the only one struggling to apply the concepts they had learned over the previous three months. “Once I learned to be uncomfortable and saw what I could gain by pushing past that discomfort I knew then how to continue in my learning process,” he shared.

Give this process everything you can give it but don't forget to occasionally take breaks. I truly value every moment from my time at NSS no matter how frustrating some parts can be. I would say there is a learning experience in every one of those moments.”

Dustin loves to learn from podcasts during his commute or while taking care of chores at home. Since most of the podcasts he listens to come from recommendations by friends, Dustin wanted to create a simple asynchronous way to share those recommendations. His front-end capstone, Podist, allows users to curate a list of their favorite podcasts that other users can view to find new podcast recommendations. He built the application with React, the Listen Notes API, and a JSON database. “I added in various types of functionality to [recommend podcasts] such as a feature on one view that displays a random podcast episode from a randomly chosen podcast so the user can read the description and also see if they might want to add that to one of their lists. There is active search functionality utilizing the external API and I used Material UI to style the application. I also used various other tools in the creation of the app such as react-router, json-server, as well as standard tools such as VSCode, Git, and Postman.”

For his back-end capstone, Dustin created a travel app to help large groups plan joint trips. Anyone who has travelled with friends or family that are coming from different places know the frustrations that can arise when trying to coordinate schedules. With Consilium, Dustin hopes to reduce these frustrations. Consilium allows users to input their flights, accommodations, and activities into the app so that others traveling with the group can see them and coordinate their travel plans. “I built the application using React for the client-side and connected it to an API built using Django and Django Rest Framework,” he explains. “I built the API side to offer some variability from the endpoints and to this end incorporated the use of query parameters so that the React side of the application could utilize those to better display different aspects of the database. The application uses the Django token authentication and is styled using Bootstrap React. I also used several standard tools such as VSCode, Git, Postman, and Tableplus while building the application.”

Since graduating, Dustin has been exploring other JavaScript frameworks and Dockers/Kubernetes and diving deeper into Python. He also wants to learn C#/.NET. As he begins his job search in tech, Dustin is looking for a work environment that will allow him to continue to learn and grow as a developer.

Get to know more about Dustin on his podcast and website.

Check out all the recent grads on Web Development Cohort 38’s class website and hear the graduates share their experience at NSS and capstone projects in their podcasts below.