During the last weekend of October, the ghosts and goblins – I mean students and alumni – invaded Nashville Software School (NSS) for Hack-o-ween, our second student/alumni hackathon. Over 50 web developers and data scientists worked throughout the weekend to reach MVP on five different projects.

The fun kicked off with the alumni’s annual Halloween party, organized by Daniel Figueroa (Web Development Cohort 27). During the gathering, the projects for the hackathon were presented and teams were formed. The party also featured an exciting four-person team relay race consisting of a mummy wrap and hopping to the next station, moving candy corn from your forehead to your mouth without using your hands, and finally, chugging a bottle of water.

After a fun night, teams arrived at NSS bright and early Saturday morning to kick-off the hackathon. After a short welcome from NSS CEO John Wark, teams armed themselves with coffee and moved to their battle stations throughout the school. At a hackathon, you learn to expect the unexpected. From combining teams working on similar projects to adjusting the project scope, all of the teams found ways to adapt and hit MVP to demo on Sunday.

The number of grant applications has recently grown to more than 4000 per year and a team of five people reads every one of them. The foundation needed a way to optimize the process. Their team, Carman Wenkoff, Lindsey Basler, Kenny Bailey, and Chris Collins, met with Data Science Cohort 3 to share their objectives for the project and discuss their criteria for ranking grant applications. The class then split into groups to tackle each task that needed to be completed to rank the applications. As one task was completed, the groups shifted to work on the next task. Their work included parsing the applications, creating the ranking scheme, and creating HTML pages with their visualizations of the ranked applications. They also provided data about each state and each application.

Simultaneous to the work of the data science team, a web development team worked on designing and creating a web app to display and explore the visualizations. With facilitation from two of our instructors, Michael Holloway and Andy Collins, they coordinated the data structure/field names and how the map markers were built so that clicking on one would give the web app the information needed to display the grant application data. The web app project was led by Raf Cevallos, Web Development Cohort 25 alum, and included several current web development students. 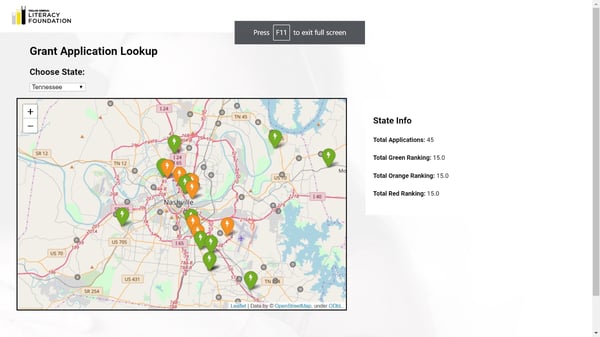 All in, 27 alumni and students worked on this project, setting an NSS record for the largest team ever! Their efforts were rewarded as the collective team received first place as voted by all the hackathon participants and guests.

See the bottom of this post for all of the alumni and students that contributed to each project. 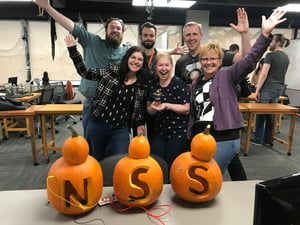 It’s not a Hack-o-ween hackathon without a Halloween themed project! The team of alumni and students created a game with pumpkins as their game controllers! Tap the pumpkin in the center to start the game. Tap the pumpkin on the right or left to move your character on the screen The goal was to collect the letters NSS in the same color while avoiding the bugs. Collecting a lightning bolt zapped all your bugs and kept you alive. Catch three bugs and your game was over. They built a second app that takes your picture when you win! The project idea was created and led by Adam Sheaffer, Web Development Cohort 7 alum and NSS instructor.

Check out this video of one of the hackathon participants playing the game: 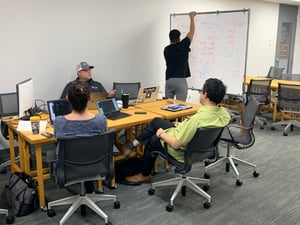 We recently introduced a checkout system to keep track of all the equipment that is loaned out to students. Throughout the day, we hear students approach our student services representative and ask, “Jeremiah, may I borrow an adapter...a monitor...a power cord…?” Jere-May-I converted the paper tracking system to a web application. The user can input the check out date, the equipment number, and the student’s name. When they hit submit, the information is sent to a JSON file for storage. The app displays a list of items that are checked out and when the user hits the Return button, the item is deleted from the JSON file. The app was built using HTML, JSON, and Vanilla JavaScript. 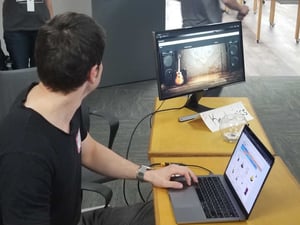 Have you ever had lyrics stuck in your head but couldn’t recall the song they were from?

Our smallest team featured two students from our newest Web Development cohorts. Dylan Griffith of Cohort 35 who is nearing the half-way mark and Guy Cherkesky of Cohort 36 who is a month into the bootcamp. Together, with the support of our instructor Brenda Long, they built an app to search for song titles with lyrics using the Musixmatch API, Bootstrap, and Vanilla JavaScript. The user simply enters the lyrics they’re searching for and the app returns all of the songs it could be. Users can click on the song they were looking for and print the lyrics. Despite their limited experience and a huge time constraint, Dylan and Guy rocked it!

We are always looking for ways to connect current students to alumni to get help when they are stuck. We’ve created a Slack channel #askAlumni and hold a Common Table at NSS once a week, but not all of our alumni can get to NSS regularly or stay active in our Slack. Enter Mentorship Hub. After presenting similar projects Friday night, Adam Oswalt, Web Development Cohort 13, and Geoff Webb, Web Development Evening Cohort 5, decided to combine their teams and co-lead the project. The resulting app allows students and alumni to create a profile including their cohort and skills. They can also post questions, leave answers, and view each other’s profiles. The app was built with React, Elixir, and a Postgres database.

A Huge Thank You To Dollar General

In addition to providing a project for both our data science and web development students and alumni, they also sponsored our food for the weekend. We appreciate their support and plan to work on a version 2 of the grant application ranking and web app for the Dollar General Literacy Foundation.

The Next Alumni/Student Hackathon

While we’re all recovering from a busy weekend, we’re already thinking ahead to our next hackathon. The next alumni/student hackathon may be a year away, but we hope you’ll join us for Hack For The Community here at NSS April 16-17, 2020.