We Learn Together | Graduate Spotlight 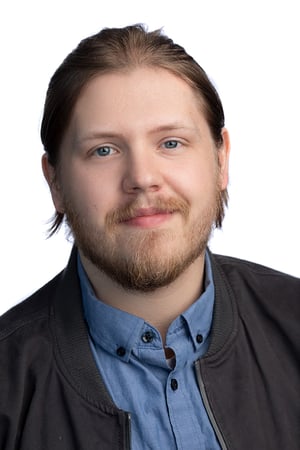 Josh Webb was in the food and beverage and hospitality industries for nearly 10 years. As a Disney Cast Member, part of Disney’s College Program, he assisted guests at rides throughout the parks. Locally, he was a suite attendant at Bridgestone Arena where he served guests in the private suites. He loved meeting new people and ensuring they had a good time, but if he was going to continue to grow his career in hospitality, that meant management and Josh did not want to be tied to the long, crazy hours that it would require. So he set his mind on a career change.

Since Josh did not have a computer at home for most of his life, he was all the more appreciative once he had one. Despite learning how to build his own computer and his excitement around computers and technology, the computer science classes he took in college didn’t get him excited about working in tech. He shared, “I wanted to make things more than anything and I was never given the opportunity to learn how.” Then his friend told him about Nashville Software School (NSS).

So when my friend was like 'Hey Josh, you should do this, you're a huge nerd!' I was like 'I AM a huge nerd.'

Before diving into a bootcamp, Josh gave web development a try with our Web Development Jumpstart. He was hooked! He saw NSS as a tangible way to learn software development to kick-start a career he knew he’d love and that would have a future.

All these changes that were coming to Nashville, while exciting, was bringing in jobs in tech that were NOT going to be filled by Nashvillians. I love this city and didn't want to be pushed out.  NSS was THE solution to both of these problems. Get the people from Nashville and Middle Tennessee prepared for this exploding [tech] market. It's not every day that you come across a place that you believe in like I believed in NSS, so I knew I needed to be a part of it.

As a part of Web Development Cohort 32, Josh’s favorite part of the bootcamp was the team projects. “I remember the first time I picked up a marker with one of my classmates, Ellie, and we started to just draft on a whiteboard what we wanted to make,” he recalled. “It was exciting to be with a team as we would discuss ‘What are we making? What do we need? How are we going to this?’ As a team, we would learn together, not just about the project but about each other's strengths and how we can leverage them all together to make something greater than the sum of its parts.”

That's the thing about Software Development, when you compare [it] to the other fields I've been in, restaurants, banquets, theater, you can't do it alone. The collaboration part of the process was my favorite surprise in this process. I had a blast.

Josh recounted how his capstone projects came together.

“My front-end capstone was the most important thing I built at NSS and it was a complete disaster. Hear me out. It was a React App called Tourney, that was a Fighting Game Tournament Organizer, think Street Fighter or Super Smash Bros, [for] multiplayer games played best in-person at tournaments. I had these amazing ideas on how I was going to take a user’s address, days available, the distance in miles of how far they are willing to travel, [and] what games they played, along with different venues the users submit and automatically create a tournament that works for the most amount of people in relation to their distance from the venue and [their availability]. [It] sounds complicated for someone who had only been coding for 3 months, right? It was.

I focused so much on the ‘cool technology’ part of it that the rest of the app suffered AND I didn't even get it to work. I hadn’t managed my own expectations or the time I would need to do these things. In the end, I had a decent CRUD React App, using a local JSON-Server, that had a cool, comic book art style to it, but it was nowhere near what I wanted to accomplish.

3 months later it was time for my back-end capstone. I had been having a much easier time absorbing C# and .NET but I can credit that to NSS main goal of teaching [you] how to learn kicking in. This time I set an MVP that I knew I could accomplish in a certain time frame and set up my stretch [goals] with [one] of the trickier things I'd have to figure out. And because of the lessons learned from Tourney, Keep It In Your Pantry came out exactly how I envisioned it within the time frame I had set.

Keep It In Your Pantry is a handy little app that eliminates two major problems in my life. One is me forgetting that I already have 3 containers of cumin at home and two does away with the ‘there's nothing to eat’ discussion. A user can input ingredients they have in their pantry, organized by where they belong, such as the Spice Rack, Fridge, Dried Goods, etc. With the users pantry of ingredients, I then hit a third party API called Spoonacular and it gives me back a list of recipes that the user could make with what they have, prioritizing [recipes where they have] everything they need already but including a percentage of total ingredients, in case they need to run out and grab that part. It's a C#, ASP.Net Core application, using Entity and the MVC framework.”

I learned so much about managing my own expectations and my time. I would let my wheels spin for too long thinking a solution was just over the next hill when, surprise surprise, it wasn't! As much as I talk about collaboration, when I was working solo I would often isolate myself too much. You have to swallow your pride and come in with the right question, no matter how basic it ‘feels’ to you.

Meetups are a valuable part of the Nashville tech community and Josh encouraged students and graduates to take advantage of the opportunities. He explained, “Nashville has an amazing community of developers, full of understanding, patient and encouraging people. Get to know them. Go to meetups, reach out, and get to know these people. You're not here to just get a job you're here for a new career, so get to know the people you're going to be seeing for however many years. No matter who you are, there is a spot waiting for you among them."

Josh enjoys tinkering with the front-end to make things better and loves figuring out the logic for the back-end. He also enjoys SQL. During the sprints and group projects, Josh discovered that he thrives in a team environment and would love to be a product owner or product designer.

During his job search, he has been working on more stretch goals for his back-end capstone and is excited to rebuild is front-end capstone with all that he’s learned since the initial build. He’s also interested in learning Angular and Python in the future.

Learn more about Josh on his website or in his podcast.

Check out all the recent grads on Cohort 32’s class website and hear the graduates share their journey into development and their experience at NSS in their podcasts below.