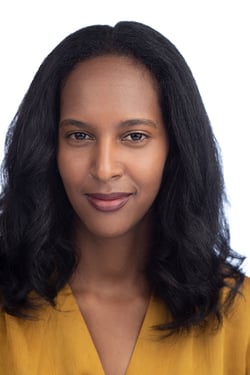 After graduating from college, Selam Tekie decided to work for an engineering firm in their government relations department before attending graduate school. In that job, she quickly learned that every decision they made was based on data. This sparked her curiosity and interest in data.

While exploring her graduate school options, Selam learned that Nashville Software School (NSS) was offering a data science bootcamp. She had heard good things from friends about NSS’s Web Development bootcamp, so she compared the cost of the bootcamp to graduate school tuition and made the leap into the bootcamp.

Selam found the learning environment at NSS to be supportive and encouraging and she enjoyed working on real-world data problems with a dynamic group of classmates from different backgrounds and expertise in a variety of domains.

She did not have any coding experience prior to attending NSS, but embraced the learning process. She shared, “I had to train myself to a different kind of learning and retaining process.” She encourages students to ask questions and keep coding. If you do that, she said, “you will learn something new every day.”

Gun Ownership And Mass Shootings In The United States

When Selam moved from Eritrea to Nashville eight years ago, her biggest shock was the number of gun-related deaths that happen in the United States. “I grew up in a country where guns are non-existent among civilians and so are incidents related to gun violence,” she explained. Her interest and curiosity in the issue inspired her mid-course capstone project where she sought to answer the question, how do states with higher rates of gun ownership rank in relation to mass shootings?

To answer this question, Selam used data from Mother Jones, an investigative website that has detailed data on mass shootings from 1982-2018, and the Bureau of Alcohol, Tobacco, Firearms, and Explosives, who tracks gun ownership by state. She used R and RMD to analyze the data and created a Shiny app with her findings.

Is There A Pattern Among The Businesses That Are Funded On The TV Show Shark Tank?

As a fan of the TV show Shark Tank, Selam was curious to know if there were any patterns among the businesses that received offers from the “sharks.” She found a dataset for the first six seasons of the show from data.world that included 122 episodes and 495 companies. Unfortunately, there was not enough data for machine learning prediction, but she was able to analyze it with Python, pandas, and seaborn. View her project on GitHub.

Here are a few of her findings:

As Selam looks for her first job in data science or advanced analytics, she is continuing to work on her coding skills and network with Nashville’s data community. She will also be joining NSS as an evening teaching assistant for our first Data Analytics Bootcamp this summer.

If you’re looking for someone to turn your data into an actionable story, you can learn more about Selam in her podcast and on GitHub.

Check out all of the recent grads on Data Science Cohort 2’s class website and hear the graduates share their journey into analytics and their experience at NSS in their podcasts below.