Always Believe In Yourself | Graduate Spotlight 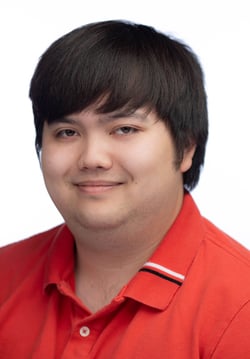 Mark Hale studied chemistry in college with plans to continue into medicine. However, he realized that he didn’t really enjoy it. After college, he took a job as a pharmacy technician but knew he wanted to pursue a career in tech. He wasn’t excited about the idea of going back to college for another three and a half years to complete a computer science degree. Fortunately, Mark’s friends recommended he look at coding bootcamps.

In researching bootcamps, Mark found Nashville Software School (NSS). He shared why he chose NSS, “NSS was by far the best choice. The reviews from previous students and the amount of care that NSS pours into everyone are amazing.”

Mark’s biggest challenge during bootcamp was balancing the full-time bootcamp with a part-time job. “In the end, everything was worth it,” he shared. He also explained that some concepts took longer to grasp, but his instructors and classmates were always there to help.

Always believe in yourself. Even if you can't do something today, that doesn't mean you won't be able to do it tomorrow.

What happens when a video gamer has too many games? They have a hard time deciding what to play next. For his front-end capstone, Mark built What2Play to solve that problem. Users load their collection of games into the app. They then select a category and the app chooses a game for them to play. It also suggests new games the user may want to purchase. Mark built the app in React using Semantic-UI, the GiantBomb API, and JSON-server. His biggest challenge was finding the right data and making it useable.

For his back-end capstone, Mark focused on his experience as a pharmacy technician. Every day, he noticed customers dropping off a prescription and returning to the pharmacy before their prescription was ready. PharmaQueue is a real-time application that allows customers to see where their prescriptions are at in the queue so they can better plan their return trip to the pharmacy. PharmaQueue has separate views for the customer and the pharmacy technician. It is a C# MVC application with a SQL database to store the information and SignalR to update the customers in real-time.

Mark’s favorite part of the program was meeting new people and career development events like the round table where he was able to meet other Nashville developers. He landed his first development job shortly after graduation. He said his transition from NSS to the job was made easier by team projects and practicing scrum. “It made me feel really good about what we’ve learned seeing it being performed in the workplace,” Mark concluded.