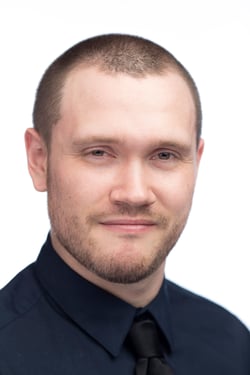 Kelly Cook was a customer service representative for an organization that provided continuing education credits for licensed professionals. When a colleague announced to the team that he was putting in his two weeks notice to attend NSS and become a web developer, it sparked Kelly’s curiosity. You could become a developer without a computer science degree? You could learn to code as an adult?

Kelly was ready for a career pivot so started doing his own research into NSS. He found that NSS was well respected in the community. When he heard his former colleague finished bootcamp and got a job in tech, Kelly was sold.

As a part of Cohort 27, Kelly enjoyed working on team projects and building his capstone projects. He shared, “I got to see the project come to life and that was a real treat.”

He faced a lot of self-doubt throughout the bootcamp. “I always felt that I was inferior and that I was not as good as my fellow classmates. I am still struggling with this, but I think I'm getting better at it,” shared Kelly. It's not uncommon for students to believe they are behind their classmates, even when that is not true. We encourage students to compare themselves to where they were last week, last month, and when they first started bootcamp.

Never give up and ask a million questions.

For his capstones, Kelly chose a topic he could have fun with – music. His front-end app, called MyGearList, allows musicians to keep track of all their gear. He built it in React and used several design features, including MDBReact, IconScout, FontAwesome, and GIMP.

Kelly’s back-end capstone helps musicians book rehearsal space. “I had to play a show one night and the normal practice spot we used was occupied,” Kelly explained. “ In a rush, I looked for rehearsal spaces to book. Every single one required you to call them and make an appointment.” To add to the struggle, “every phone call went to someone’s personal cell phone, not guaranteeing an immediate answer. I wanted to be able to log into someone’s website and book a time to rehearse from my phone.” Enter Ensayar, Spanish for rehearse. Kelly built the app with C#, Entity Framework, and SQL statements. Kelly shared, “While [building] the application had its difficulties, I am glad that I persevered.”

During his job search, Kelly is keeping his coding skills fresh with class exercises.

Check out all of the recent grads on Cohort 27's class website.