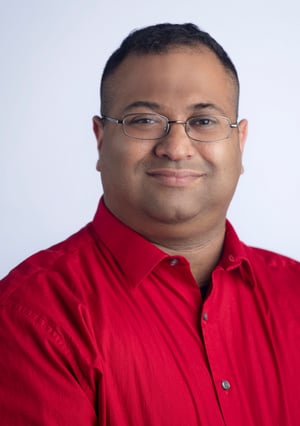 Shuaib Sajid was an MRI technologist for 12 years, but he was ready for a new challenge where he could use his creativity, have a better work-life balance, and find a sense of purpose. He would work 12 days in a row with 2 days off and was constantly being called back to work between shifts. He was missing out on life and was too tired to enjoy the birth of his son.

Shu shared, “I always wanted to get into computers. I could see everything that could be created utilizing them. I saw the dawn of the consumer internet. I witnessed miracles of technology from simplifying mundane tasks to robotic-assisted surgery. I yearned to be part of this world, part of this era in humanity. This is my slice of life.”

His wife found an article online about Nashville Software School (NSS), but they initially decided that six months was too long for Shu not to be working. So he explored another bootcamp in Nashville with a three-month program but decided to wait until he saved up a little more money. When that bootcamp closed suddenly, he was devastated.

But then he attended an NSS info session. He was excited to hear about the growing tech community in Nashville and how NSS is community-focused. Shu applied that night. He interviewed but did not get in. So he applied and interviewed again. He shared, “I knew the [second] interview didn’t go well, but I knew that development was what I wanted. I turned in my notice and took Web Development Jumpstart while I awaited confirmation for the bootcamp.” He did not get in but was told he would be reconsidered for the next bootcamp cohort. Shu was accepted into Cohort 26!

I know that I should feel like my life was on hold for a year waiting to get inside a class, but I actually feel like I arrived when I was meant to and not a moment too soon. If I was accepted earlier or later I would not have been part of the perfect storm that my cohort was and my experiences would have been vastly different.

Shu encountered several coding roadblocks throughout bootcamp, but he learned how to think through problems to get unstuck. His advice for others going through an NSS bootcamp?

Fully commit. Keep going even if you don't believe in yourself. You will continually surprise yourself with what you are capable of.

His front-end capstone is an exercise tracker for NSS students. Students are given exercises to work on, and due to the fast pace of the bootcamp, Shu had a hard time keeping track of what exercises he had completed, which ones he was stuck on, and what exercises he had not yet started. NSS Student Exercise Tracker lets students mark where they’re at on any given exercise. There is also an instructor view that lets the instruction team see where the full class is on exercises and can be used to help identify concepts the class is struggling with. He built the app with React and JSON server.

Completing his front-end capstone was a highlight for Shu. The process of creating an application from start to finish gave him confidence and reassurance that he had chosen the right career path.

His back-end capstone is a character generator for Shadow of the Demon Lord, a game similar to Dungeons and Dragons. Creating new characters requires following a set of complex rules. Shu’s app shortens the time needed for a player to create a new character by helping them create a character that adheres to the rules of the ancestry type they pick. He built the app with C#/.NET with MVC Entity and Identity. He used Razor Pages for the front-end to create a simple character sheet with all the details about the character they just created.

Shu is currently interviewing and preparing for code challenges in tech stacks he didn’t learn in bootcamp. He also plans to continue working on Shadow of the Demon Lord Character Generator. He enjoys working with back-end technologies a little more than front-end, but hopes to continue to work with both. He likes the intricate puzzles of C#/.NET and wants to continue to learn more in this tech stack.

Check out all of the recent grads on Cohort 26's class website.