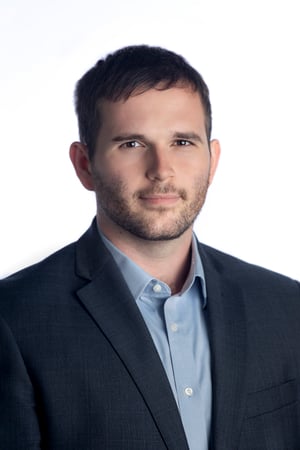 Ronnie Young was a construction loan processor for a bank in Kansas City before he and his fiancé decided to move closer to home. Before their move to Nashville, Ronnie spent his free time exploring software development and job opportunities in technology. After arriving in Nashville, he decided to make the leap into software development rather than finding a new job in banking.

He learned about NSS and did his research by reading reviews and Reddit posts. Ronnie decided to give our Web Development Jumpstart class a try before committing to a bootcamp. He was already getting his hands on some code, but his time in Jumpstart solidified that NSS was the place for him to learn the skills to become a developer.

Ronnie is a graduate of Cohort 25 and encourages new students to “keep at it and work harder.” There is always something more to learn or better understand and the best way to do that is through constant practice.

Ronnie admitted that he struggled with procrastination during the bootcamp, but a conversation with one of the instructors turned it around. He didn’t want an instructor to worry about his performance and it motivated him to work harder. The experience helped him understand his importance on a team. His teammates were relying on him to do his part.

It all came together a few weeks later during a group sprint. The group worked well together and they were completing the project one ticket at a time. Ronnie shared, “It was just one of those moments where everything clicked and all cylinders were firing.”

For his front-end capstone, Ronnie built an application for his old job as a loan processor. Using React, he created a budgeting app, called All Budget Beta, to improve the loan operations and construction process for banks. The app eliminates some of the back-and-forths between banks and their construction clients.

Run For It, his back-end application, was inspired by his love for running. Ronnie explained, “I am an avid runner and have never liked using the majority of running apps due to their bloatware, so I made a simple, sleek, running app that ran on the Django Framework of Python to do for me what other apps could not.”

Post graduation, Ronnie has continued to code and is working on two projects. He is building a clone of Reddit using React and Django with a couple friends and is learning Swift and React Native for another project. Ronnie shared, “I spend at least 8 hours a day doing something code related; whether that's coding, studying, watching a relevant video, or attending a meetup. I’m focused on the tech world.” Ronnie has found a new career he can be excited about!

Check out all of the recent grads on Cohort 25's class website.