2018 Hack For The Community A Success 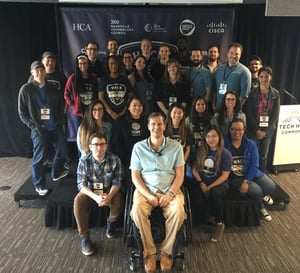 After 36 hours, there was still a lot of energy in the room as teams shared what they built with their fellow developers, designers, and community members. The 20 non-profits who received new website features and applications that will save them time and money were excited to show off their new tools! I spoke with several of them and they were all grateful for the volunteers who made it possible.

Jordan Castelloe of Cohort 23 joined Hack For The Community to gain some real-world project experience before she graduates in May. Prior to NSS, she managed a specialty toy store for five years, so she was excited to be on the team for Discovery Center, a children’s museum in Murfreesboro. She shared, “I loved working on a team with diverse skill sets. At NSS, we’re working with people who’ve all been trained to do the exact same thing, so it was a novelty to watch specialists collaborate.”

When working with developers who are more experienced than you, it’s important to push your imposter syndrome aside and find a way to contribute. Jordan explained, “I had to be fairly adamant about participating in the project. Because I didn't know as much as the more senior developers, it would have been easy for me to fade into the background and watch them work. I ended up grabbing the first thing I (kind of) knew how to do and running with it. I don't think it would have worked to wait passively to be handed something to do. I also think it helped to be able to laugh when I made a dumb mistake. It took the pressure off me, and it made them more comfortable pointing out my mistakes as the project progressed.”

Since Hack For The Community was about building projects for non-profits, it meant the teams were working with real clients who were not well versed in the technical jargon. “They didn't always have the vocabulary to articulate exactly what they wanted,” Jordan said, “and our developers didn't always have the vocabulary to articulate their options. I actually felt like I had a communication advantage over some of the more senior developers, because I was a non-technical person much more recently and still vividly remember what it's like. It was easier for me to translate between technical and non-technical jargon. Another reason to hire a junior!” 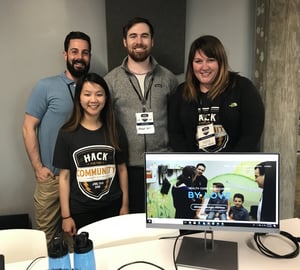 Paul Ellis graduated in March with Cohort 22 and worked with Siloam Health during the hackathon. He shared, “Non-profits like Siloam Health give Nashville its heart. It was a real treat to support what they do through Hack For The Community and to have so much fun doing it! I appreciated how much planning went into the event. The folks at HCA clearly put a lot of work into it. I remember more than once, I would think of something I needed to do only to find it had already been done by the event planners. I plan to volunteer for the next one and recommend the experience to anyone. Make sure not to eat much the week before, because the food is great, and there’s plenty of it!”

Dr. Teresa Vasquez is no stranger to hackathons. Having graduated in January with Cohort 21, this was her third hackathon. She chose to work with Boys & Girls Clubs of Rutherford County since her brothers grew up playing basketball with the Nashville club. “When I saw what their app was capturing,” she explained, “it made me want to work on their project even more. I am a huge proponent of gathering data and they wanted to gather social/emotional data from their kids, which to me is super important in the growth of a child. I wanted to be a part of that.”

Teresa summed up her experience, “this hack was awesome because I got to work with some really experienced devs who had a lot of faith in each other. There was no micromanagement on our team and decisions were discussed quickly and then executed.”

“We also were able to help each other a lot, which is where I saw the most growth for myself. I was confident going in, but after a few hours with these guys, my confidence grew even more. I was the only woman on the dev teams and I never once felt like they didn’t trust my expertise or what I could bring to the team.” Check out Teresa’s blog where she walks through the lessons she’s learned during each hackathon.

While most of the NSS students and alumni were scattered across the teams, there was one team that was almost all NSS affiliated. That team built a webpage that will show volunteer submitted stories about how they are Doing Good in their community. Doing Good created a short video highlighting their experience.

It was fun to watch the Doing Good team come together in the final minutes to adjust the styling on the page. A few team members were calling out code while another rapidly typed and tested the changes. While they may not have realized it in the moment, it was a sign of just how far they’ve come while learning at NSS. 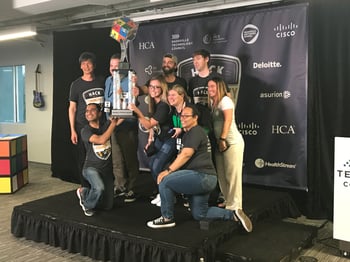 The hackathon ended with a celebration of all of the work accomplished. Two teams received awards for their team spirit and then it was time to announce the runner-up and winner of the Hackers Choice Award. The runner-up was the team for The Family Center. The winner of the Hackers Choice Award was the team for Boys & Girls Clubs of Rutherford County. All four teams had representation from NSS students and alumni, but the real winners were the 20 non-profits who have new tools to help them with their mission.

So what’s next? We are currently developing a program to provide post-hackathon developer support for a few of the projects. This will be part of a broader plan to give recent NSS graduates more hands-on development experience through real-world projects with local non-profits. More details to come.