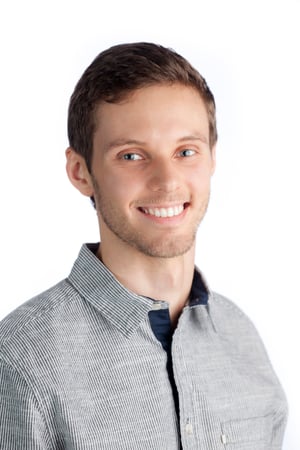 Prior to NSS, Dre Randaci was the head of operations for an e-commerce startup selling imported Italian coffee equipment in the southeast. He traveled around the region consulting with clients who were opening cafes, designing their bar flow, determining equipment needs, and keeping things organized in the process. He enjoyed his job, but there wasn’t much room for growth. So he decided to explore a new career path with more opportunities.

Dre enjoyed working with the platforms used to build the e-commerce websites (Squarespace and Shopify) and was curious about how they were built; he wondered if he could build software as well. He started to learn a little code in his free time and was hooked on NSS after attending an info session. Before making the leap to a bootcamp, Dre went through one of our Web Development Jumpstart classes which gave him a good introductory foundation to web development.

NSS has incredible connections to the Nashville tech community, and once I was exposed to that, I knew what they were doing was special. Their curriculum, support, and devotion to mastery is truly remarkable. Once you're a part of the community you have access to endless resources and other developers that are willing (and genuinely want) to help new tech enthusiasts grow.

Dre joined Evening Cohort 6 which allowed him to keep working for the first six months of bootcamp. After finishing the front-end of the program, he made the switch to Day Cohort 22 to complete the program. Dre found the exercises completed throughout the bootcamp to be fun and challenging. He also liked the collaborative environment, which mirrors real-world software development teams. He shared, “I really enjoyed working on teams to accomplish bigger goals. Collaboration unlocks greater potential and learning from other developers is a treasured pursuit.”

His biggest roadblock was learning how to communicate where he was stuck. It took practice. Dre encourages current students to “show people what you are doing. Talk about your app. Demo your app/projects to your classmates or the community.”

Learning how to talk about software is a skill in itself and will dramatically improve your confidence when entering the job market.

His front-end capstone is a web-based climbing trip builder called Crag Rock. Dre wanted to create an easy way to find climbing routes nearby when traveling. Users can save routes and view them later. The app was created with Google Maps Geocode and Places API’s, Mountain Project API, AngularJS, Bootstrap, and Firebase. He explained his design and build process, “I knew I wanted to use Google Maps and really emphasize user experience for the front-end, which led me to working in constraints on what and where the user could go and do at any point in time. I utilized wireframing techniques for layout and planning, GitHub issue tracking with automation, and a million scribbled notes in my project notebook.”

For his server-side capstone, Dre built an iOS mobile app called Watson. The app allows users to take pictures of animals or bugs and IBM Watson’s Visual Recognition will identify the animal or bug. He liked the freedom of building a full-stack application so that he could build the app to his own specifications without limitations. He used a similar design and build process for wireframing and issue tracking, but sought more feedback from classmates and friends on usability. He explained, “this helped me work around small bugs quickly.” The app was built with React Native and C#/.NET.

As Dre looks for his first software development job, he’s learning about graphing data and machine learning with Tensorflow.

Listen to Dre's interview with Clark Buckner about his capstones and check out his portfolio site.

Check out all of the recent grads on Cohort 22’s class website.