For over 20 years, Nashville’s grassroots tech community has been the lifeblood of our tech scene. There are dozens of individuals who have helped shape the community we see today. On this episode of 10 Years | 2000 Journeys, we hear from Tommy Norman, Bill Israel, Deanna Vickers, and Jason Myers, all who have made an impact on Nashville’s thriving tech scene, as we take a look back on why the grassroots tech community is so vital. 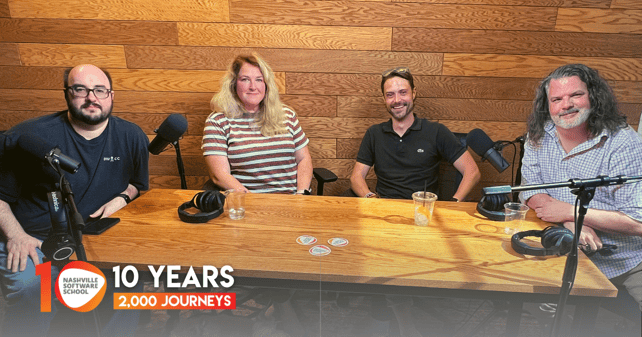 Jason Myers has been very active in local meetups and conferences over the years, first as an attendee and then as a co-organizer of conferences like PyTN and Nodevember. He also helped start the NashDev Slack workspace in 2015 with Will Golden, which has proven to be such a vital piece to Nashville’s thriving grassroots tech community today.

I'm excited to see some bigger companies come [to Nashville] too, because you know, a startup is not for every individual and it's exciting to see us grow. ”   - Jason Myers

I think that there's a really excellent longevity within our [tech] community of people being involved..” -Deanna Vickers

Bill Israel has been involved with several meetup groups over the years, but most recently has been leading the PyNash meetup and the PyTN conference.

Give a talk [at a meetup]. Everyone from someone who is in their first week at NSS to someone who had been doing it for 20 years has something to talk about.” - Bill Israel

Tommy Norman and John Kellar started the DevLink technical conference back in 2006. The conference ran for 9 years and was precursor to Music City Code, now Music City Tech. Tommy has also been very involved in Agile Nashville.

Here, there’s a lot of passionate people…There’s always this passing-of-the-torch. There’s not a big turf-war. [Other cities like Atlanta or Chicago] are more corporate-y. But it’s more grassroots here.” - Tommy Norman

Listen to what our guests had to say about their experience with the growth of Nashville’s grassroots tech community in our latest podcast episode!