Ronnie Young of Web Development Cohort 25 described himself as being “lost” and “a mess” while living in Kansas City before deciding to move to Nashville and attend NSS. Now, Ronnie works as a full stack developer.

“I would have never been able to close the gap between education and application without NSS,” he remembers. “The material is out there somewhere online, but NSS brought it together and pressure cooked it into me.” Since landing his first job in software development, Ronnie speaks to the things that he has learned and what has been most helpful in his career thus far.

LESSONS FROM HIS FIRST JOB

The most important skills he’s learned on the job haven’t been about coding. “It's all [about the] soft skills. I've learned some DBA stuff and some tricks with the console and command line, but anyone could figure that out,” he laughs. “The hard part is [learning to] work with others and bridging the gap between their understanding and your understanding.”

We asked Ronnie what advice he would give to those currently job seeking, he encouraged his fellow alumni to “keep on keeping on, take whatever comes, and make the most of it. This may be the first place [you work], but it's not the last place.”

Keep working on yourself and chasing your goals.

He also notes that it’s okay to not know everything and that your first job as a junior developer may have you doing seemingly “random” things, but it’s an opportunity to gain experience while learning what you do and do not like in a job. Ronnie used that experience to tailor his search for his second job. “It also helped that I knew way more people in the field and things in general during the second job search,” he shares.

It's a TON of work, and it will never get easier, but that's OK. It's what makes the field fun and worth being in.

GROWTH & CONNECTIONS AS A DEVELOPER 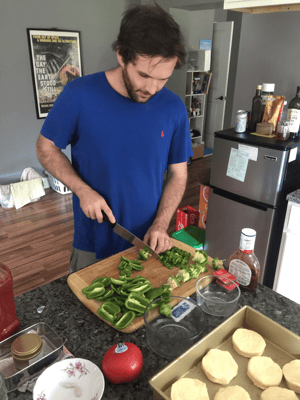 Many working developers can attest that working on various projects outside of work will help you grow in your career. In addition to learning on the job, Ronnie has kept learning in his free time. He is pursuing a B.S. in Computer Science, migrated to Linux to get hands-on with DevOps, and is studying for the AWS DevOps exam. He also looks for ways to pay-it-forward and is helping a college student learn through an internship. While it may sound like it, it’s not all work and no play for Ronnie. When he’s not coding, he enjoys gardening and explains that it’s teaching him patience, another important soft skill, as he helps things grow.

Pursuing interests outside of tech, like gardening, has helped Ronnie make new connections in tech. Ronnie reveals that the three best connections he’s made weren’t through a tech meetup or LinkedIn, but “have been random occurrences either at random [places] or non-tech related groups.” His advice while making connections and networking, even online, is to “follow your interests, there will be some form of technology there and you can bond over your shared interest.”

Thanks for catching up with us, Ronnie! We are excited to continue following your developer journey and hope you’ll share some fresh peppers with us this summer!